Hiking down the Barranco de Masca from the quaint village of Masca is one of the most rewarding day walks on the planet. This relatively remote trail weaves between towering cliffs to arrive the deep blue Atlantic Ocean. The trail is relatively basic and some basic scrambling is required however it is achievable in 3hrs for most people with moderate fitness. It is possible to walk back up the barranco from the sea but most people enjoy a swim before catching a boat to the nearby town of Puerto de Santiago.

The trail is located in the western corner of the island of Tenerife. No visible trace of the indigenous civilisation remain here but the more recent colonial village of Masca is historic enough. This sleepy village was only opened up to the world with a road in 1991. Even with the road the place has a somewhat timeless appeal. Barranco is the Spanish word for a ravine or gully – there are dozens of smaller barrancos fanning out from the central Mt Teide volcano and running down to the coast.

Start at the roundabout and carpark in the middle of the village of Masca. Walk downhill alongside the road for about 50m and turn left onto a minor road. After about 100m veer right and then continue along the ridgetop lane for a further 200m. Turn left off the lane and down the steep gravel trail towards the barranco. Proceed past the basic signage and down into the gorge along the fairly well used trail.

Once in the gorge itself it is virtually impossible to get lost – simply continue downhill. There are some sections where climbing under or over rocks is required but most of the walk is relatively straightforward. After passing over dry waterfalls and through the deepest sections of the gorge you approach the coast. Typically the roar of the sea can be heard some time before you pop out onto the shoreline.

Just before you arrive at the coast you will pass a well watered and slightly out of place looking homestead. The black rocks of the shoreline are awkward to sit on but the swimming is refreshing. There is a small and dilapidated concrete pier that provides access to the numerous tourist boats that come and go.

The hike itself only takes about 3hrs from the village of Masca to the coast. Most people walk the route down to the sea and catch a boat out. Be aware that the sun rises late and sets early in the gorge. The boats stop operating mid-afternoon so check you can get out without a hike back up the gorge. If in doubt take a flashlight and some warm clothes for the walk back to Masca.

In summer it is oppressively hot and dry so bring plenty of water. Flash flooding is a potential hazard so we wouldn’t recommend attempting the route if rain is forecast.

There are limited shops at Masca so bring something to eat to keep you going in the gorge.

The trail can be steep in parts and requires sure footing. The trail could be better described as a route, often over solid rock and without any real delineation from its surroundings. Vertigo is unlikely – unless you look up.

Sun protection is recommended. Consider taking something to swim in and a towel to get changed under at the beach.

The occasional person attempts the walk sandals but proper footwear really is a must on this walk. Boots would be worthwhile but careful walking in sneakers or trail shoes would work.

Access to the top of hike is typically by car, bus or taxi. If you are travelling by car try to arrive early to secure one of the few parking spots. Many people choose to taxi from the nearby coastal resorts. The bus service accessing the area is fairly limited. It is possible to bus to the town of Santiago del Teide and walk the 5km road over the saddle to Masca. More details on the bus service are available at http://www.titsa.com

To leave the hike either retrace your steps back out of the gorge or catch a passenger boat. Tickets can be pre-purchased from Masca. Apparently space on the boats can run out so consider buying yours before starting the walk.

It is also possible to arrange a pick-up and drop off service at some hotels.

There is little, if any signage on the walk. Fortunately almost none is necessary since the trial follows the watercourse down the valley.

The only place for supplies is the village of Masca.

Twisting an ankle is a real possibility. If you did become injured you would need to be carried out or walk out yourself.

Heat and flooding due to heavy rains are the only other major hazards. Rockfall from the surrounding cliffs is a potential hazard most of the rock is fairly sturdy.

Expect to see a variety of curious looking dry climate plants. There are plenty of small lizards but little else in the way of animal life.

We used the Rothers guide for our walks on Tenerife. The current version can be found here: 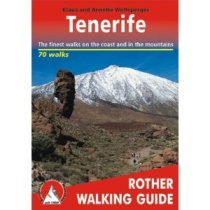 We hopped on a bus from the safe but pretty tired looking Titsa bus terminal in the northern town of Puerto de la Cruiz. After a long but interesting bus ride we hopped off the bus in the sleepy town of Santiago del Tiede (elevation 930m). It wasnt practical to catch a connecting bus to Masca so walked west along the winding road over the saddle (elevation 1,060m) and onwards to Mascao. The walk from Santiago del Tiede was about 5km long and almost entirely on a steep winding road. Fortunatly the traffic was light. The occasional taxi driver stopped to offer us a ride or sell us boat tickets. We were happy walking and enjoying the vertigo inducing views of the countryside.

We stopped in Masca just long enough to buy boat tickets from the local store before heading downhill. The trail was easy enough to find and we passed a few curious looking plants and plenty of startled little lizards.

The walk through the gorge itself was breathtaking! Definitely one of the best walks in the world. Imposing natural rock bridges and grand cliffs surrounded us. It was difficult to capture the scale of the place with a conventional camera. There were a number of other people walking but since everyone was heading in the same direction and at a similar pace it felt like we had the place to ourselves for most of the time.

At the coast we were greeted by a serene and slightly quirky scene – the inhabitants of the house at the bottom of the gorge had irrigated their fantastically lush enclave which behind a rusty wire fence. The beach itself was a collection of jagged black rocks that were scalding in bare feet. We enjoyed a refreshing swim before our boat ride. Several boats came and went and each time the motley assortment of walkers on the beach got up and tried to board – anxious they might miss their boat and face a sunset walk back up the gorge. We started having our doubts about the piece of card we had been sold as a boat ticket but eventually our boat did arrive. The boat ride included a free beer onboard which was a fantastic way to cap off the afternoon and ready us for a long bus back to the other side of the island.